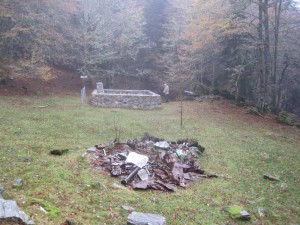 Despite the weather today, John and I were determined to make a little pilgrimage to the tiny Anglo Canadian Cemetery at the Clos de Douly (1400m), both as a mark of respect both to the airmen who were killed on the night of 13th July 1944, and to honour those who tended the graves and eventually created this remarkable little memorial. It is now officially recognised as the highest war grave in Europe. Three maple sablings have been planted between the cemetery and the heap of rusting metal that marks all that remains of a Halifax bomber. 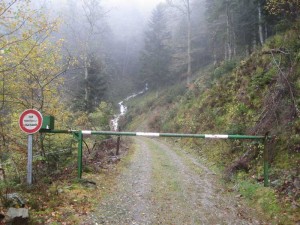 Whenever we happen to be in France on 11th November we try to visit. But always before, we have bumped into other walkers on the path. Today we had the place to ourselves. The barrier to the car park was down and a sign warned that the road was off limits except to foresters or ‘those with the right’. I got out of the car and raised the barrier. We had ‘the right’. After all, if you can’t pay homage to the war dead on Armistice Day, when can you? 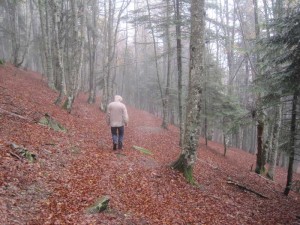 Even in the rain, the 2-3km walk up to the cemetary is beautiful and evocative. Today we walked up in silence, hearing only the birdsong, the rain and the crunch of the beech leaves under our feet. I signed the Livre d’Or with the same words that appear on the memorial’s brass plaque, “De peur qu’on oublie” (lest we forget).

So, how did these airmen come to be buried on a wooded mountainside at the Clos de Douly?

On the night of 13th July 1944, a Halifax bomber crewed by an Anglo-Canadian crew of seven, took off from Algiers on a mission to parachute arms and munitions to the local resistance fighters, the Maquis.

Navigation systems were not what they are today, and only a few specialist crews would be capable of executing the low-level night flight into the mountains close to the border with Spain. Even with a highly experienced crew, perfect weather conditions were necessary. Tragically for this mission, a thick fog descended near the drop zone, and the plane crashed into the eastern flank of the Pic du Douly, killing all on board.

Due to the remoteness of the area, the crash was not discovered until a few days later, when some shepherds came upon the wreckage. A boy was sent down into the tiny village of Haut Nistos to warn a local schoolteacher – a founder member of the Maquis de Nistos Esparros.

It took three hours the following day for a detachment of Maquis, accompanied by a number of villagers, to reach the crash site. One of the members of crew had survived for a while after the impact and, though fatally injured, had managed to salvage the boxes of weapons and munitions from the burning fusilage before dying a few yards away.

The men spent the day carefully collecting the crew’s identity tags and other personal effects, overseen by Maquis commanders. They then used the munitions boxes to bury the seven members of crew at the crash site, marking each grave with a small pile of stones. When the burial was complete, the commanders distributed the new weapons and ordered the young Maquis to present arms in a salute to the dead men.

Remember that this was Vichy France. There was a Gestapo base in nearby Lannemezan and news of the crash or the distribution of weapons would certainly have resulted in swift reprisals. All involved in the recovery and burial, some as young as 15, were sworn to secrecy.

The authorities were informed of the deaths of the crew members, and their personal effects returned. But there was no official action concerning the makeshift cemetery on the mountainside. The bodies of the dead were not repatriated.

Throughout the next 46 years, the villagers never forgot the bravery of the Halifax crew, who lost their lives in the name of French liberty. The graves were carefully tended and each year, on the anniversary of the crash, a solemn group of English veterans, villagers and veteran resistance fighters, would make the three-hour ascent to hold a small memorial ceremony and place flowers on the graves. 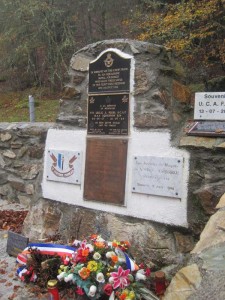 In 1989, a new road opened that passed within an hour’s walk of the burial site, and plans were hatched for the creation of a formal cemetery. Work began in June 1994. Local rock as used and other materials were airlifted in by helicopter. Water was piped from a nearby source. The inauguration, held in August 1994, included surviving relatives of the English crew members, RAF veterans, the British Consul and several veteran members of the Maquis. At this time, the relatives of the Canadian pilot, Leslie Peers, had not been traced.

In 1998, Jean Bordes, one of the surviving Maquis who had helped bury the airmen, met Alain Gaudet, a Canadian who had been living locally for several years. Alain Gaudet had no knowledge of the existence of the cemetery or of the Canadian pilot buried there, but was deeply touched by the story. He immediately offered to help trace Commander Peers’ relatives. In 1999, two further memorial ceremonies were held to honour the Canadian officer. The 40-strong Canadian delegation included Peers’ son and daughter-in-law and grandson from Ontario. 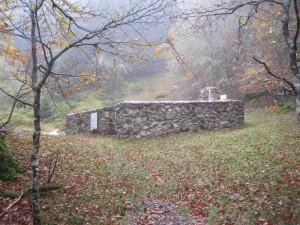 In 2000 the cemetery was officially recognised by the War Graves Commission, and Alain Gaudet was appointed its local representative.

For many years a mass was held on 11th November at the cemetery to commemorate the dead and celebrate L’Armistice, the cessation of hostilities that effectively ended the First World War. The mass no longer takes place on the mountainside, as there are few veterans still able to manage the precarious walk to the cemetery. A ceremony is held instead at the base of the mountain at the Mairie in the village of St. Laurent de Neste.

A detailed account of the Halifax crash, construction of the cemetery and history of the Maquis can be found at L’histoire du Maquis de Nistos Esparros.