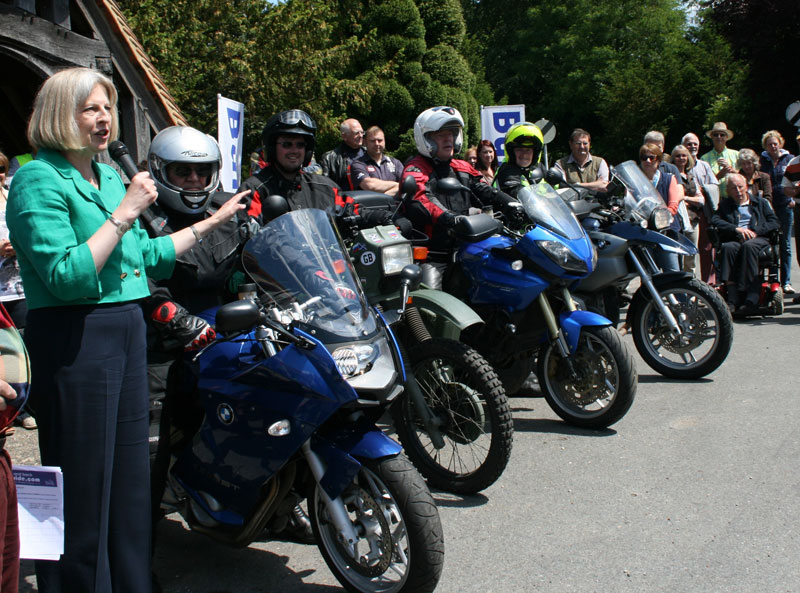 We probably couldnt have wished for a better first day on the road. The good people of Waltham St. Lawrence laid on a fabulous send off, with a silver band, smoked salmon bagels, BBQ breakfast and a magnificent display of classic motorcycles. The weather played ball too. Blue skies and sun shine glinting off all the polished chrome. It was warm enough too for us to show off our Moscow 2 Moscow T-shirts.

Then came 12 noon and the great send off. The local MP, Home Secretary, Theresa May did the honours. A first for her, she said. In all her years as an MP, she had never been asked to do a wave off before. We lined up in front of the Lych Gate and, after a few words from Philip Lewis, a former patient of Poppa Guttmann and Trustee of the Trust, who recently celebrated 50 years in a wheelchair, we started our engines. Theresa May did her bit, the crowd counted us down, and we manoeuvred deftly through the throng  in my case, rather too closely avoiding a collision with my cousin Mike Mackenzie, Chairman of the Poppa Guttmann Trust, without whom John and myself would not be involved!

Then we were out on the open road with a 360-mile ride ahead of us. For Jim this was something of an achievement. Following several weeks illness in April, Jim is unable to complete the whole European leg of our trip and his participation will be limited to the UK events, culminating in our Ace Café send off on Thursday, 16th. Fearing that he would find the ride to Scotland too fatiguing, we tried to persuade him to put his bike on the trailer and hitch a ride with Robin in the truck. However, the warm weather and the speed restriction imposed on us by John Plumbs 350cc Harley played in his favour. Just as well really, as the support truck that was due to leave at 12.30pm didnt get away until 3pm.

There were a few excitements, needless to say. The first within minutes of joining the M40, when Jims carefully packed black bin liner luggage came adrift. Feeling a slight flapping sensation, Jim attempted to wedge the loose end under his bum, but he was unsuccessful. Moments later a pair of black galoshes were bouncing down the main carriageway and lost forever.

Later, John Plumb briefly treated us to a one man firework display, when he lost the retaining spring from his centre stand at 60mph. Robin had just caught us up and we were fortunate enough to have the trucks hazard lights to protect us as John effected a roadside repair with gaffer tape. Having driven all the way from Waltham St. Lawrence, principally as a support vehicle for Jim, Robin looked quite disappointed that his services were not going to be required for John either.

We ate a quick meal at the Westmoreland Farm Shop and arrived at the Abington Hotel at around 9.30pm. We were happy and tired and no one bothered to look at the clock until we got into the hotel bar. With todays ride, Jim had achieved more than he or anyone else really believed possible. He ordered a double whisky and retired to his room  and a hot bath!

We discovered via Margot that the send off event at Waltham St. Lawrence had netted around £1900 in takings for breakfasts, tombola tickets and T-shirts. And another £1000 had been pledged in sponsorship.