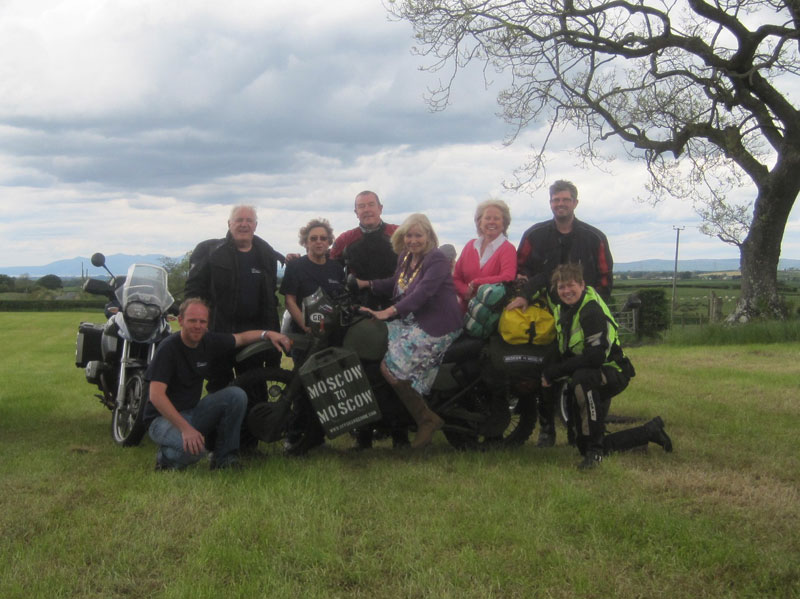 The Abington Hotel kindly organised breakfast at 7.30am, half an hour earlier than usual, so that we could make a quick getaway to the Scottish Classic Motorcycle Show at Ayr Racecourse. Our surprise appearance came as a result of a clash of dates for our Moscow send-off. We stayed until about 2.30pm and then headed over to the main event.

Moscow had laid on quite a show for us. On arriving in this tiny Ayrshire village, we were stunned to find a field full of visitors cars, two bouncy castles and several marquees. There was a bar, a barbeque, a tea tent selling trays of home-made cakes (2 for £1 and, no, you couldnt just have one for 50p!), local arts and crafts, a childrens entertainer and a bale-tossing competition for aspiring young farmers. We were interviewed and photographed by the local press and, at the end of the day, escorted from the premises by two very good-natured officers from the Strathclyde Police and a local piper.

Without question, the star attraction was John Plumbs Harley Davidson MT350. Reactions to its suitability in terms of the ride varied from enthusiastic advice to cynical laughter. Even so, by the end of the day, we had managed to persuade both Stephanie Young, Provost of East Ayrshire, and Winifred Sloan, Provost of South Ayrshire, to pose for photos astride the bike. And there is no doubt that its 60mph top speed will do wonders for our fuel consumption over the course of the next few weeks. 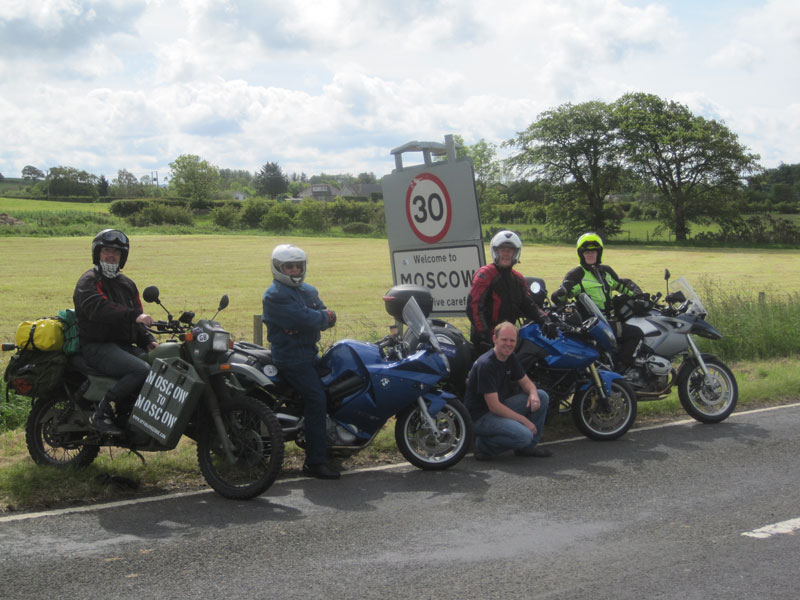 Jim was perhaps less lucky in allowing the local MP to try his BMW for size. He was nowhere to be seen as the Police escort pulled out, blue lights and all, ahead of the piper. Fearing an embarrassing hiatus, JR, John Plumb and I followed at a stately walking pace. After a slight delay, a slightly red-faced Jim caught us up. It seemed that, as the MP had dismounted the bike, she had accidentally kicked Jims helmet and detached his visor. Being unable to retrieve his specs from the support vehicle, he was more than a little relieved when a young lady, in true Carry On fashion, offered to pop it in for him!

John and I stayed with my cousin, Leslie Du Cane, at Skelmorlie. John Plumb had contacted the new owners of his childhood home in West Kilbride and had been invited to stay with them. Jim and Robin headed off to a hotel in Glasgow.

Monday was a rest day.  John Plumb spent the day revisiting his childhood haunts, while Jim, JR, Robin and I, rode up the West Coast for a seafood lunch at Loch Fyne. Robin, admitting that he was a bit sorry not to be coming to Russia with us, left the truck behind and donned a helmet to ride pillion with John.