Holidays, eh? No sooner are we back in the UK, than John has been called away to deal with yet another family drama. So I thought I’d post a couple of pictures from our Guinness brewery tour to cheer us both up. 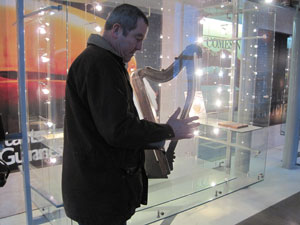 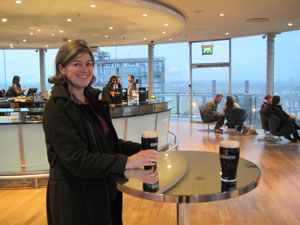 And here’s me, just about to sample the perfect pint (in the sparkliest glass) in the Gravity Bar  Dublin’s highest viewpoint. Shame about the weather LOL!

One Thursday Anne says, ‘There’s this thing, when I go down on my
John, his balls are always cold.’

‘Funny you should say that’, says Mary. ‘my Franks balls are always
cold too.

‘EEAUUWWWWWWGHHHHHH’ says Nancy, ‘that’s disgusting.
How can you both do that?’

So her friends tell Nancy that the blow job is the best way
to keep her man from straying.

The following Thursday, Anne and Mary are in the restaurant waiting
for their friend to arrive. In walks Nancy with a huge black eye.

‘What happened to you’? ask her two friends.

‘Mike hit me’ came the reply.

‘I don’t know’, says Nancy, ‘I was giving him the blow job like you
told me to, and all I said was, your balls aren’t cold like Frank’s
and John’s.’

As you can imagine, a lot has happened in the two months since my last post. We got Mum home, safe and sound, in time for Christmas. Though it wasn’t, perhaps, quite the merry feast that we had all hoped for. Festive food, especially those dishes whose main ingredients consisted of dried fruit and nuts, proved quite a challenge to Mum’s digestive system. There were regular bouts of painful indigestion and sickness, culminating in a blockage that required yet another surgical intervention. The good news is that the operation went well and, despite the loss of yet more weight and muscle-strength, we all believe that Mum is now well on the road to recovery. So, with our London house now finished and on the market, and Mum convalescing in The Elms, John and I put the cats in a cattery and took a bit of a break.

It was all a bit “last minute” and we are being a little secretive about our current whereabouts. You don’t need to be Sherlock Holmes to work it out, but John’s mother is under the impression that we are still on the Isle of Wight, and we would rather keep it that way.

Knowing what a hard winter it has been so far here, it was reasonable to assume that an uninsulated summer cottage would be a touch chilly in mid-February. Thus, having failed to identify any charity sending blankets to Haiti, we borrowed two or three from Mum’s vast, moth-ball scented collection, dragged the all-seasons duvet and pillows off our own bed, and packed our thermal undies along with a dozen bottles of wine and three quarts of comforting home-canned stew.

We were right about the cottage. Despite the turf fire and central heating, we can still see our breath indoors. A hard frost covers the road outside and dark clouds race in off the Atlantic, bringing with them hail, sleet and snow.  But things could be worse. As quickly as the clouds arrive, they are gone again. Far off, the Cliffs of Moher and O’Brien’s Tower emerge silhouetted against a narrow band of blue sky and shafts of sunlight paint the neighbouring fields bronze, copper and gold. And, if all goes to plan, this view (or one very similar) will shortly be ours to keep.

The welcome has been characteristically warm and we have already been fed to within an inch of our lives or, at the very least, to the last hole on our longest belts. Then there is the Guinness. No trip would be complete without a good drink with John’s cousins. So, on Friday evening we ate in and agreed to meet up in Inagh for a jar or two around 9.30pm.

Whether due to the recession or to the smoking ban, O’Rinn’s seemed unusually quiet. We had a couple of pints there, then adjourned across the road to Dillons, where a poker game was drawing a bit of a crowd. As, one by one, the players threw in their hands, the dimly-lit bar emptied, leaving a few die-hard drinkers and our small party. I felt a hand on my shoulder. “Hey, Ollie, how are ye?”, said Marie. The owner of the hand was a thin elderly man with long white hair and a complete absence of molars. He poked a boney finger at John, “What’s wrong with your hair, Tulip? Are ye a policeman or someting?”. Then, to Theresa, “This’ll be your husband?” Theresa indicated that John was actually my husband, to which Ollie reacted with apparent disappointment, “Eh, so ye’re married to Tulip?” He backed off a little and began to sing a Republican tribute to the Falls Road Volunteers. Mercifully, the entertainment was swiftly brought to a conclusion when the landlord hit the light-switch and plunged the bar into darkness. It was time to leave.

I don’t remember anything else about the evening. It was, in fact, about 3.30am when John and I got indoors and I was asleep before my head hit the pillow. I have no idea if John had achieved the gallon, but was only glad that I had been drinking halves to his pints. It was still dark when John woke me, clambering about on my side of the bed. If my luck was in, my sense of humour was definitely out. “What the f*ck are you doing?”, were the most romantic words I could muster. “I need to pee and I can’t find my way out. Where’s the f*cking door gone?” came the reply from my disoriented and increasingly panic-stricken husband. I quickly turned the light on before there was an accident.

Suffice to say, I was more than slightly relieved when Jim rang on Saturday morning and put us off until tonight.

Very little chatter here lately. Do you ferriners celebrate St. Valentine’s Day? If so, have a happy VD. If not, have a great day anyway!