Wednesday had been an unsatisfactory day for so many reasons. Once again we had spent the whole day on the road, leaving ourselves limited options for an overnight stop and arriving too late for a proper meal.  We were not in the best of humour faced with a choice of flaccid microwave dishes and frothy beer at 10 oclock at night.  Tomorrow would be different, we assured each other. We would get on the road early, eat authentic local food in characterful roadside cafes, and see a bit of the countryside – getting to Riga in plenty of time to enjoy the festivities. Well, that was the plan

Thursday started well. We made ourselves coffee and were on the road by 7am. By 9am we were eating an Egg McMuffin breakfast at McDonalds in Suwalki, and taking advantage of their ever-reliable free WiFi. So much for the authentic local food! 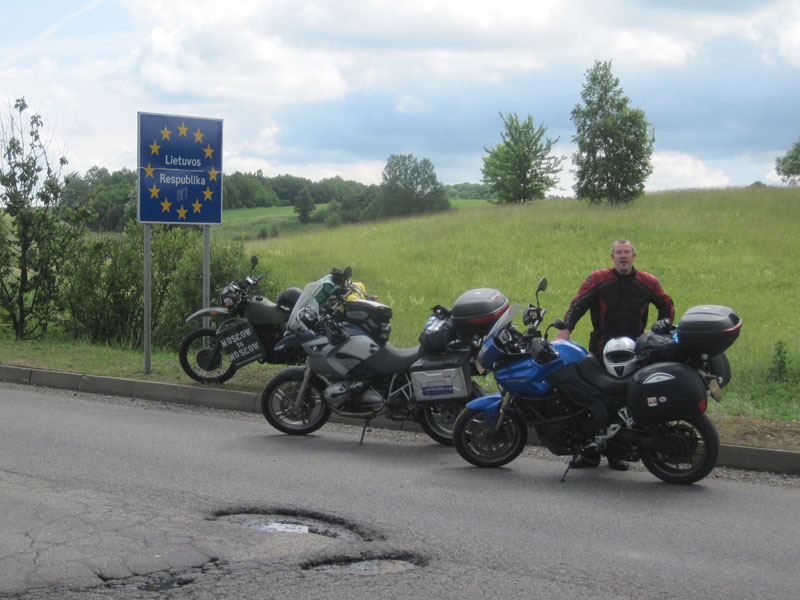 We stopped for a Kodak moment at the Lithuanian border and again for lunch in a shopping centre in Marijanipole. Other than that, there didnt seem an awful lot to stop for at all. The countryside was green and flat, the only visible settlements being the odd collection of dilapidated wooden shacks. The only diversions were roadside stalls selling home-grown produce. But we were more pre-occupied with staying

alive on a two lane highway that often accommodated up to four lanes of opposing traffic! Bus drivers in particular have no respect for distance from the vehicle in front, whether four-wheeled or two, and one or other of us frequently found ourselves forced onto the hard shoulder to make way. During our entire transit of the country, we only saw one building that might have been worth leaving the road for: an aerodrome motel, with an old Soviet Mig parked outside it! Despite the excellent road surface, it was with a certain amount of relief that we stopped for a photo at the Latvian border.

We pulled into Riga around 7pm. It was later than we had intended and we hadnt researched anywhere to stay. Even so, it wasnt a problem. It was a national holiday and no-one had any intention of sleeping tonight. We stopped next to the colourful market stalls in Kungu Iela, in the heart of the old city, and were quickly surrounded by friendly and helpful people  one of whom used his iPhone to locate a hostel for us. It didnt take long before we were comfortably installed and back out on the street looking for dinner.

In fact, we could have probably saved ourselves some money and had an equally good, if not better, meal down by the river, where the party was in full swing. There were live bands, dancing (though none of it naked), barbeques, bonfires, beer and crowds of people, young and old, sporting flower or oak-leaf headdresses, joining in with the sing-a-long. Tradition has it that, during this ancient midsummer festival, everyone has to stay awake until dawn. If a young woman falls asleep before sunrise, it is said that she will never marry. 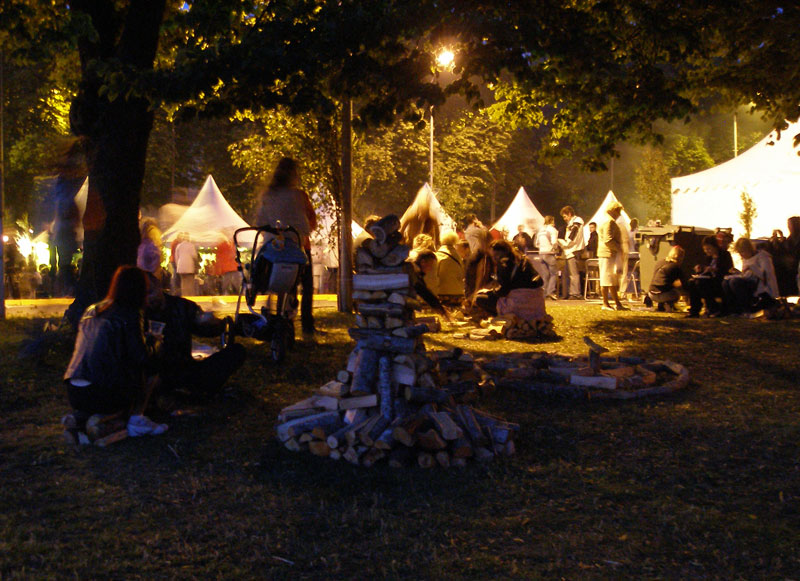 After our long days ride, we faded and went to bed around midnight but the revelry evidently continued without us. When we ventured downstairs at around 8.30am, the hostel manager was asleep on the sofa in the reception! Being a day ahead of schedule, we awarded ourselves a rest from the bikes and spent Friday exploring Riga.

On Saturday morning, we left for Narva, Estonia, and the Russian border.