John Plumb had taken up the offer of a bed from “Couch Surfer”, Alex, a native of St. Petersburg, so we met up in McDonalds for Wi-Fi and a quick coffee, before tackling the border. We had been told that motorcycles dont need to queue, which was reassuring, but it was clearly not going to be a particularly speedy transit.

First stop was the Bridge Toll office  illogically situated about 2km out of town. The Toll serves no purpose in the immigration process, other than to issue a ticket with a queue number on it : 1 for a motorcycle, no change given! 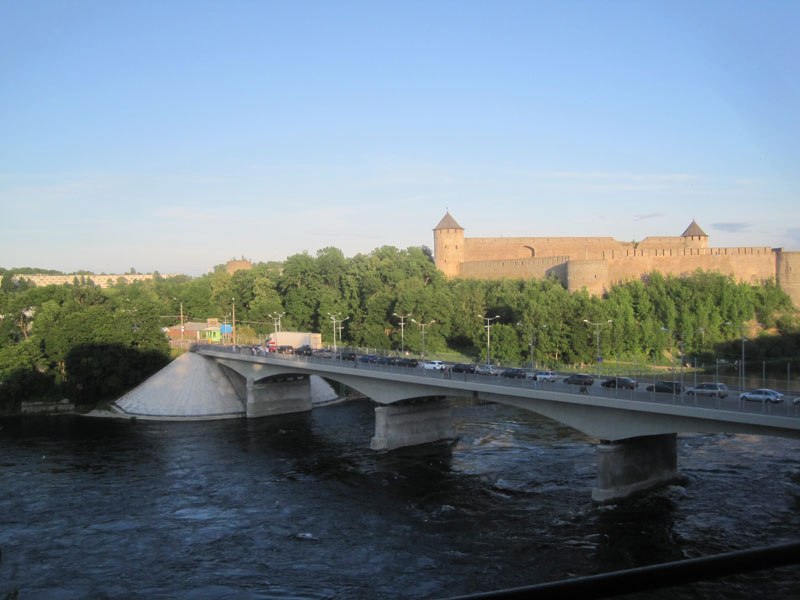 We rode back to the bridge and handed over our tickets. The Toll officer immediately raised the barrier and waved us through to the next stage  Polish Border Control. On the other side of the road, half a dozen Latvian and Lithuanian Harley riders were returning from a Rally in St. Petersburg. We noticed they didnt hang around long. The Border Guard wasnt interested in the purpose of our visit. He checked our passports, visas and vehicle registration, made an entry on his computer  and signalled to us to continue to the Bridge  passing all the waiting cars and lorries, and coming to a halt at the barrier on the Russian side.

The female Guard checked our passports, visas and vehicle registration again, and issued us with three forms: a multi-lingual immigration card, and duplicate copies of a customs form. In our haste to get the process over and done with, it took a moment to realise that the customs form was in German. It was quickly exchanged for an English version.

On to Border Control, and John Plumbs MT350 was beginning to raise a few smiles. We showed the Customs Officer our Russian-language postcard, describing our trip. He glanced at it briefly before helping us to fill out our Customs forms correctly, gruffly marking crosses in boxes we had missed and then checking that we had correctly duplicated the entries on the second copy. By the time we reached the Immigration booth, there was genuine humour behind the stern façade. Dealing with our Immigration cards, the officer laughed as he told us that, two weeks earlier, he had seen some mad Brit who was planning to cross Siberia on a Honda 90! The gruff Customs officer, meanwhile, engaged in light-hearted conversation with John Plumb, as he proudly showed off the luggage-carrying capacity of his front-mounted ammo-carriers! 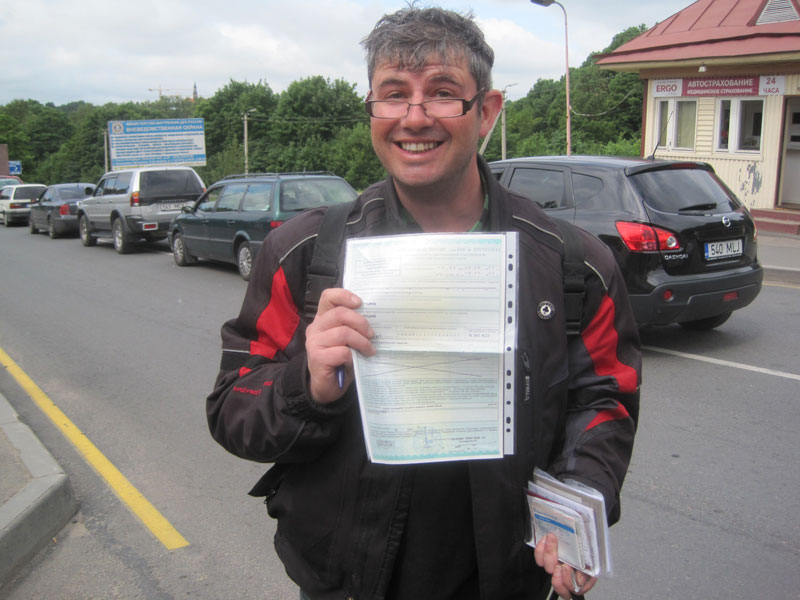 Immigration completed, we wheeled our bikes forward a few paces to the Customs booth. With our forms correctly completed, this was really no more than a slightly time-consuming formality. Entries were made on the computer, and a cursory inspection was made of our luggage. Our forms were stamped up, and we were away  at least as far as the first Currency Exchange booth, where John Plumb also had to buy Green Card insurance for his bike. (JR and I are resident in France, and our bikes are French-registered. Our French Green Card is valid throughout Europe, including all the Baltic States, Russia and the Ukraine  though, in my case, the validity was only confirmed after the agent borrowed a pair of reading glasses!)

The whole fast track process took a couple of hours. But it was painless and good-humoured. There was no sign of any corrupt activity, and no money was taken off us, aside from the 1 bridge toll. Cars and lorries, however, are a whole different ball game. Some can queue for 5 days to cross!