Motorcycle adventures and other stuff …

The distance from Ivangorod to Saint Petersburg is less than 100km, so we might reasonably have expected a short day. However, we lost an hour on crossing the border into Russia, so it was already late afternoon and we had yet to find somewhere to stay. JP had been expecting to stay with Alex, but Alex was not due back in Saint Petersburg until 7pm. He had kindly looked up a couple of hostels for us, and had sketched out directions to find them on a Post-it note. The sketch looked ominously like a bunch of grapes with some twirly stems. But it apparently represented some blocks of flats and a complicated series of junctions (which we were to ignore). However, Alex had assured John, it was all much more simple than it looked, just follow the road into town until you reach a big arch and then turn left at the lights 

Things started to go wrong with the directions, when we misinterpreted the word Prospekt for a street name. We dutifully followed Alexs instructions, and ended up in an industrial area, quite clearly miles from the historic and beautiful centre of the City. We needed a rethink.

Of course, both the guys had Garmin. Unfortunately, neither have detailed Russian maps. This was no oversight. JR had ordered and received Russian maps a month or so earlier, but they turned out to be incompatible with his unit, rendering the Cyrillic alphabet as gobbledygook. Nevertheless, with his knowledge of the relative layout and geography of Saint Petersburg, John was sure that if he zoomed out to the large scale map, he should be able to pick a route to the centre.

Our renewed optimism was short-lived. After the first turn, the road ahead was closed and, unable to find an escape from the one-way street, we found ourselves heading back out of town. Then it started to rain 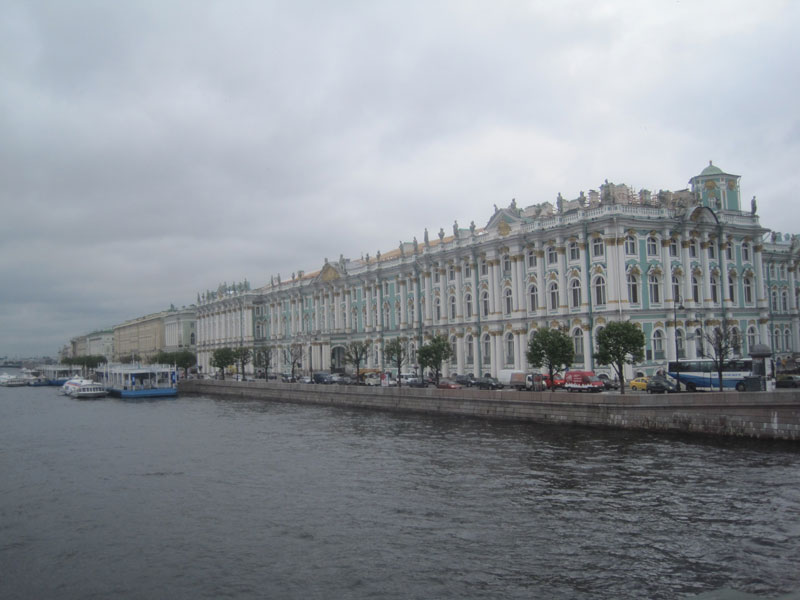 t have gone round in circles for miles before Johns system paid off, and we arrived on Nevsky Prospekt  but we were a long way from Alexs recommended hostels, and we had no way of getting reliable directions for alternative accommodation. We werent even quite sure how far we were from Saint Petersburgs main tourist areas. The only thing we could say with any certainty at all was that we were all soaked through and thoroughly fed up. Somehow we hadnt expected Saint Petersburg to be so  big!

Now it was my turn for a brainwave. What we needed most, I decided, was McDonalds: the comfort of a hot coffee and a Big Mac, and access to the Internet. In my best BBC Beginners Russian, I asked directions from a passer-by. Most of her reply was, of course, lost in translation.  We did establish that there was a branch about 2km further on, but we couldnt find it. We spotted an Ibis Hotel across Ligrovsky Prospekt, but were prevented from getting to it by a railing separating the two lanes of traffic. The rain was still coming down in stair-rods and we could make no sense of the road system. We turned left and made a two or three kilometre det

our before arriving back on Ligrovsky Prospekt.

The hotel was full, but the kind receptionist rang through to the Moscow Hotel and asked them to save a couple of rooms for us. The cost seemed exorbitant, but we were in no position to argue. JP declared that he would spend the following day searching for an alternative. Spirits were low and tempers were frayed. We badly needed a lift and, luckily, we didnt have to wait long for things to start looking up.  John and I arrived back in the car park to find JP talking to some chap on a Harley. Maxim!

Maxim was in Saint Petersburg for a Harley Davidson rally and, at some point during the kerfuffle over finding a hotel, he had texted John to find out whether we had arrived in town. As soon as we were able to let him know that we were booked into The Moscow, he came over to meet us and find out our plans. 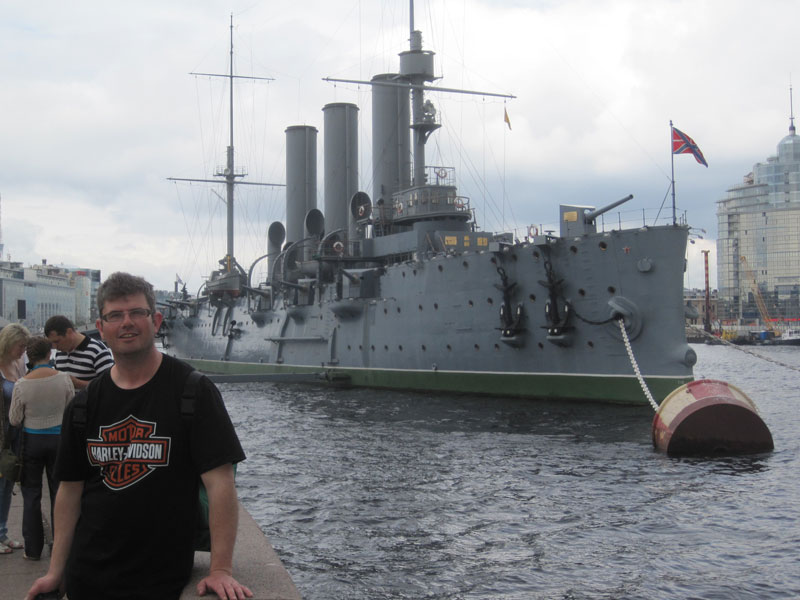 In fact, Maxim was due to leave for home in Moscow the following evening and asked if there was any way he could be of help. JP, who had, regrettably, taken the brunt of the fallout over his inept couch-surfing friends directions, did not hesitate. Yes please, Maxim. Please find us a decent hotel in Moscow  near the Metro, with bike parking and Wi-Fi.  for $50 per night, added Maxim with a smile. Absolutely, said John,  and then please meet us somewhere really, really, easy to find, and escort us to it!

We agreed to meet on Wednesday in the car park at Ikea.

On Monday morning, we ate a strange and rather bland-tasting breakfast of anaemic sausages, egg porridge and baked pudding, in The Moscow Hotels enormous dining room. Then, equipped with a tourist map from the receptionist, we set off to explore Saint Petersburg on foot.

Top of the list was, of course, the Hermitage Museum, with its vast and priceless collection of treasures and antiquities from the era of the Tsars. Our guidebook told us that the Hermitage was founded in 1764 and comprises eight departments, housed in 350 halls. Unfortunately, if we had read to the bottom of the page, we would have noticed that it is closed on Mondays 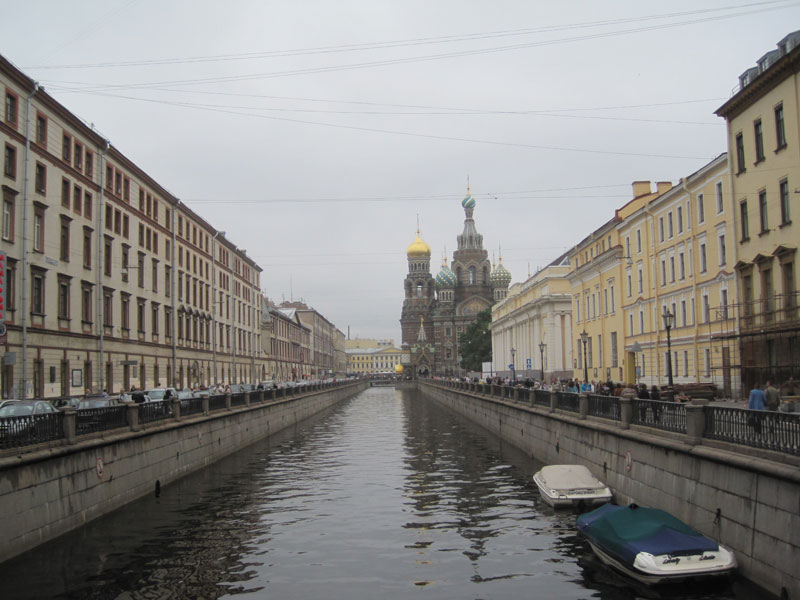 We were disappointed, but it didnt matter. The Hermitage is so huge, it is said that to see everything on display, you would need to visit the museum every day for three years.  Since we only had a day, it meant we could spend more time looking at other things. We took some photos and walked over the bridge to the impressive hexagonal Peter and Paul Fortress.  It is from this fortress, founded in 1703, that Saint Petersburg gains its name.  Originally called Saint Peters Burgh, the fortress was renamed Peter and Paul Fortress after the Peter and Paul Cathedral that was built there. We had a bite to eat at the Forts café and then continued on to see the Aurora battleship, launched in 1900 and is now, since its retirement in 1948, a monument to the October Revolution.

By the time we got back to the hotel, we had extremely sore feet.