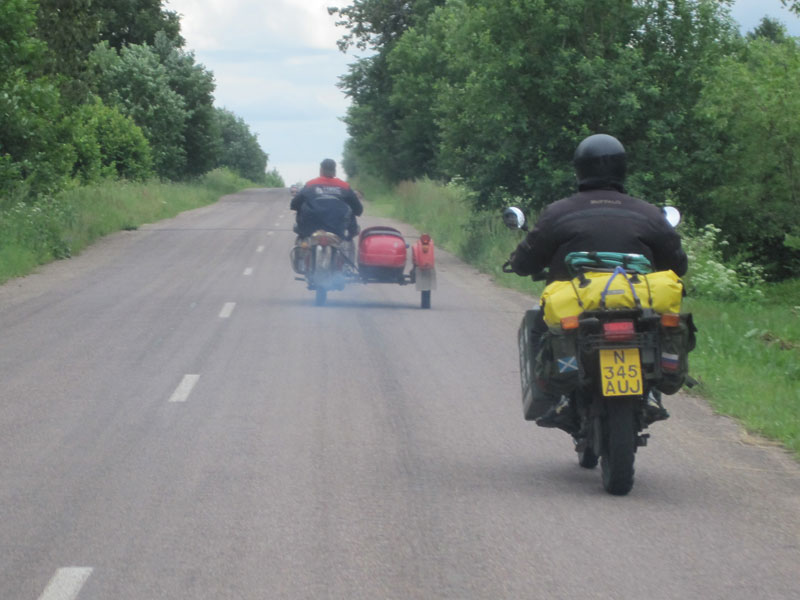 So  we left Saint Petersburg on Tuesday morning and rode as far as Vychniy Volochek, a little over half way to Moscow. Considering this is a main arterial route, the road was in shockingly poor condition. We had been warned about the weight of traffic and road works, but I dont remember anyone telling us about the bits between the road works: the long stretches of unsurfaced carriageway, interspersed 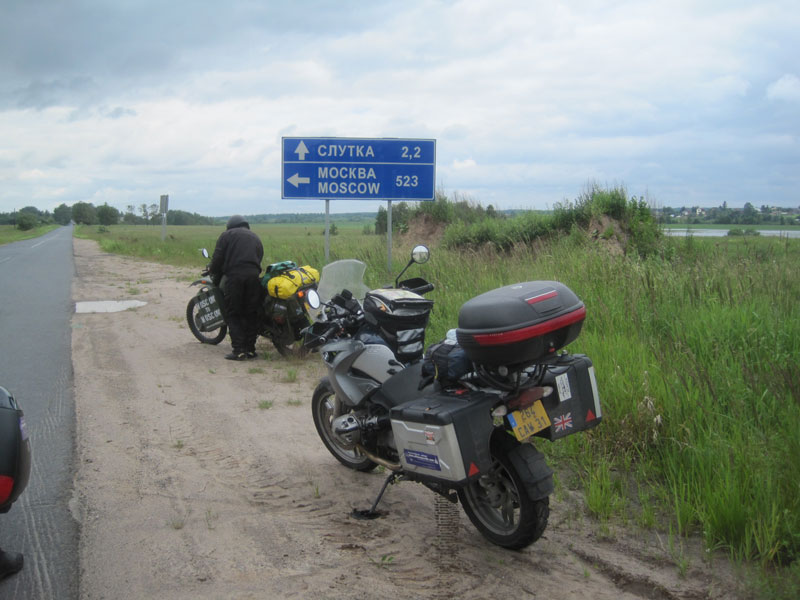 with potholes  and I dont think we saw anyone actually working on the road at all. Safe navigation was further frustrated by the need to overtake slower traffic. The road is a three lane highway, which meant that you had to take your chances quickly if you were to stand any chance of getting by before your overtaking lane came to an abrupt end  – usually signalled by the sight of a heavy lorry hurtling towards you in the same lane!

Theres little I can say about Vychniy Volochek, except that it was probably once a rather lovely holiday resort. There were hints of a former grandeur in the run-down buildings and unloved statues that lined the main street, but the overall impression was of a dusty border town from an old Western. It was hot and humid, flies buzzed around the carcass of a dead dog on the pavement, and our unventilated hotel room seemed to be home to a number of well-fed mosquitos. We left before breakfast on Wednesday 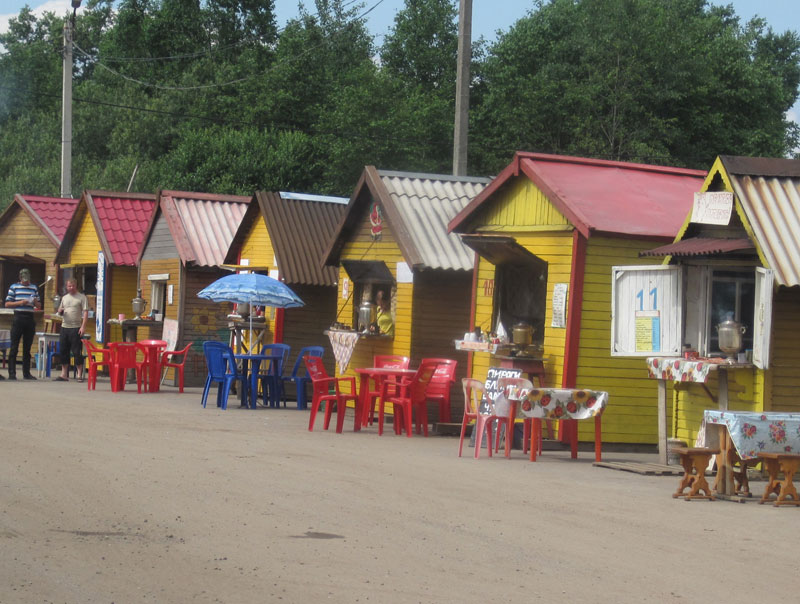 There is something wonderfully reliable about Ikea. It doesnt matter what country you are in, branches of Ikea look exactly the same, even if the words for Entrance and Exit are written in Cyrillic script. And they are always visible from the motorway. Even so, I managed to cause confusion when I spotted Ikeas flags flying outside their distribution depot, just off the inner ring road, but still some 20km out from the City. Having arrived safely in the store car park, we called 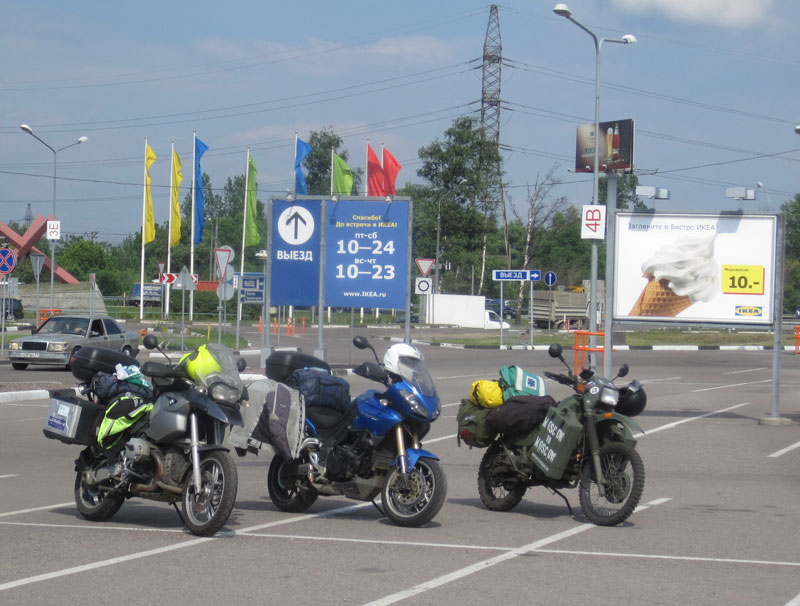 Maxim  only to be told that there was heavy rain in town and traffic was at a standstill. We were to meet him at his place instead. The address was simple enough. We were to stay on the motorway and he would be waiting for us outside Building 31. Uh?!  This sounded ominously like a repeat of our Saint Petersburg experience.  We asked for clarification. Yes, yes. Its fine. Just carry on the road youre on. After the fifth tunnel, youll see a sign for Building 33, and Ill be waiting in the road in my painted Ford Focus.

Now, imagine, if you will, a City, not so much smaller than London, and try giving someone directions to a house on, say, the A4

What could we do? We rode into the City, as directed, and noticed that the buildings did seem to have very obvious numbers. We had ridden a long way without seeing any tunnels, so, losing our nerve slightly, we turned off the main road when we saw tower block number 35. There then followed a very comical discussion with the caretaker of that building, a former Soviet pilot, who tried to explain that they had run out of numbers on the old part of the road, so they had built a new road and restarted the numbering beyond the airport  we were on the new part of the road. He spoke briefly to Maxim on Johns mobile, then drew a few arrows on our map  with a little stick man waving at the spot where Maxim would be waiting for us. About 15 minutes later we spotted Maxim and his painted Ford Focus outside Building 31, just as he had promised. 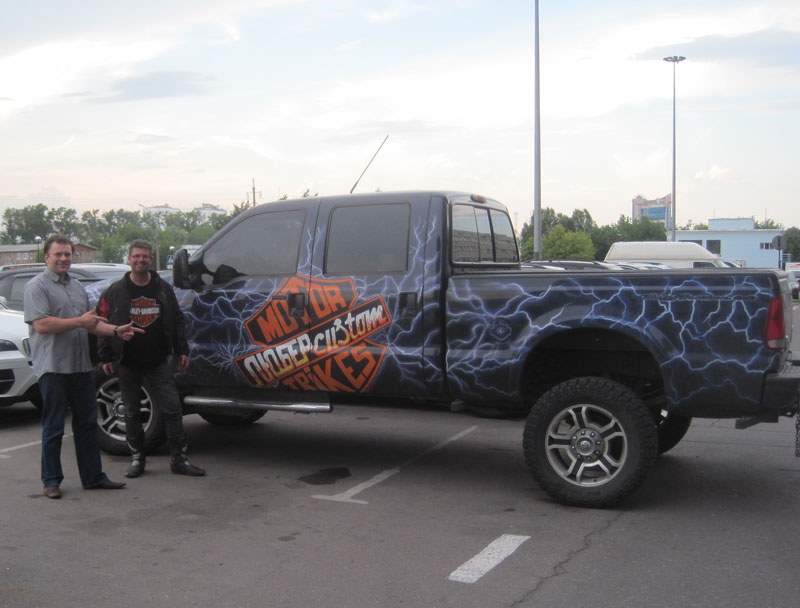 The Ford Focus, incidentally, was not the compact hatchback car we know in the UK, but an enormous 6 litre 4×4 pickup, not unlike Jim Humphreys Mitsubishi Warrior  except that it was emblazoned with lightning bolts and a familiar-looking orange and black shield on each passenger door, advertising Luber Custom Trikes.

Moscows evening rush-hour lasts from about 4pm until about 8pm. Having no knowledge of the City or even what hotel we were booked into, we had no option but to follow the truck at snails pace through the baking traffic. The BMWs oil warning light came on. The Triumphs temperature gauge was practically off the scale. Of the three bikes, the MT350 was the only one not to show any signs of complaint. On the other hand, that may be because there are no warning lights on Johns Harley

Eventually we arrived at the 3-star Gamma Hotel: similar in many ways to Saint Petersburgs Moscow Hotel a throwback to the Communist era, but within a gated community that also boasted an Alpha Hotel, a Bega Hotel and a Delta Hotel  all practically identical, with every conceivable service laid on within the hotel complex. The Gamma was perfectly comfortable and, best of all, Maxim managed to negotiate a nightly rate less than the cost of the stuffy, mosquito-infested room we had had in Vychniy Volochek the night before!

Naturally, being Russia, nothing happened very quickly. Our passports were collected and we were asked to wait in Reception while our registration was processed. After the heat of the Moscow traffic, we were filthy and looked like three boiled beetroots.  Nevertheless, the wait gave us a chance to discuss our plans for the next couple of days.

We had realised early on that a ride out with the Harley Davidson Club to Suzdal, would be out of the question. Even without the handicap of the MT350s top speed of 55mph, from what we had seen of the roads coming into Moscow, we would not have been able to travel much faster than that on any bike. Suzdal is north east of Moscow and we would not have been able to make up the miles to get to Orel for our pre-paid Saturday night hotel booking  which we were not about to waste.

Top priority for the moment was to get the photo of us having successfully arrived in Moscow  and, for us, that meant a picture of the bikes in Red Square. However, Red Square is a pedestrian zone and we had been warned that such a photo would be impossible. But not for Maxim, apparently  He would come for us on his scooter at noon the following day, and he would show us the sights.