With the memory of our start-stop journey on Wednesday evening still fresh in our minds, our hearts sank a little as we saw Maxims truck pull into the car park. But we neednt have worried. First stop on our tour of Moscow was Maxims studio, where he builds his custom trikes and keeps a respectable-sized personal collection of other motorcycles  including, amongst other things, several classic side car outfits (one of which was an ex-Russian military model with three-wheel drive), a small fleet of ex-Police Kawasakis, his Harley Ultra and his three-wheel Piaggio scooter. 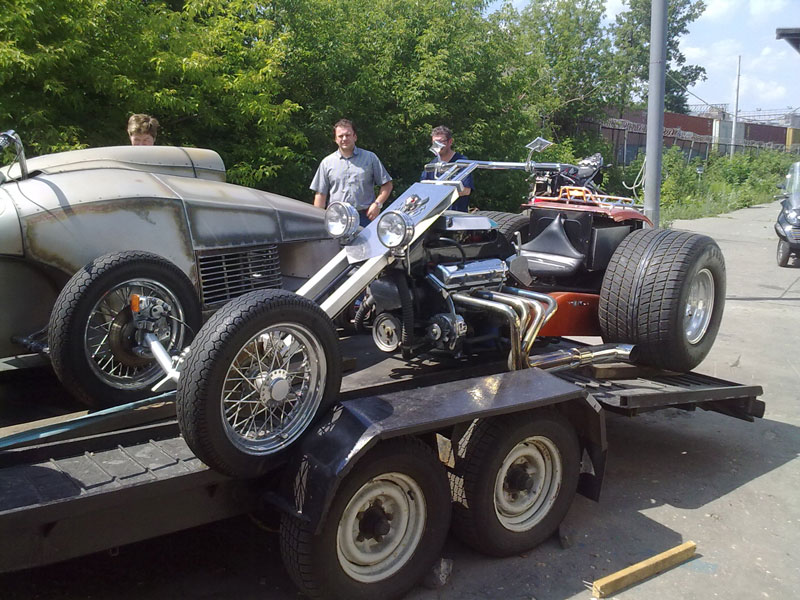 Maxims small office was testament to his love of motorcycle touring, plastered with pictures from past trips. These including the White Knights Vladivostok to Saint Petersburg ride of 2005, through whose riders we had made contact with him in the first place. Outside, he pulled the dust cover off a trailer to reveal two of his trikes. The first was a chopper-style with Formula 1 rear tyres and chrome fittings. The second was a show-stopping creature that slightly resembled a steel plate lobster with a pair of claw-like front wings acting as air-intakes. The fastest of Maxims trikes appeared to have a bike front-end attached to a racing cars rear end!

Anyway, there was no time to waste, so we donned our helmets and, in T-shirts and jeans, headed out into the Moscow traffic.

First stop was, in fact, not Red Square, but Lubyanka Jail, formerly HQ of the KGB and one of the most feared buildings in Moscow. There was a popular saying that it was also one of the tallest buildings in Moscow  not because of the number of storeys, but because it was said that you could see Siberia from its basement! 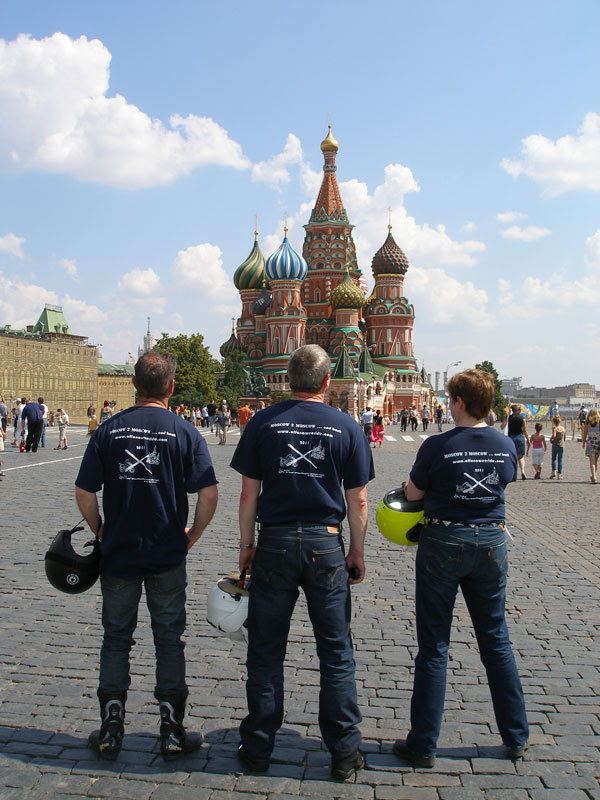 Just around the corner was Red Square. Although it is a pedestrian area, the traffic passes close by the barriers in one or two spots and it was possible, with the forbearance of a young police officer, to park the bikes for long enough to get one quick snapshot. The officer even stopped the traffic for us.

We re-parked behind St. Basils Cathedral and had a bit of a stroll about, taking more pictures in front of Lenins Mausoleum and the Tomb of the Unknown Warrior. Then it was onwards and upwards for a whistle-stop tour of the rest of the City. We had baked potatoes for lunch from a kiosk near the State University, where JPs father had studied in the 60s, and then rode to one of Moscows three Harley Davidson dealers for T-shirts. 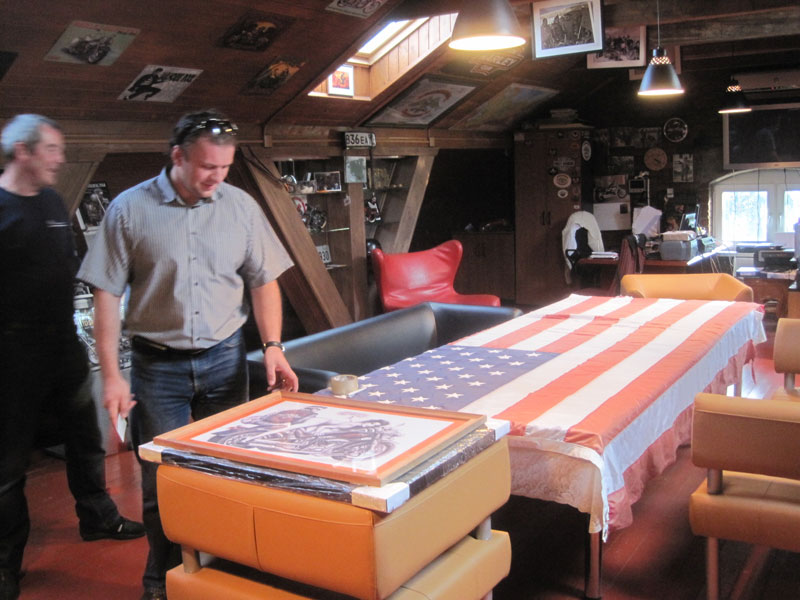 ately, while food shortages may be a thing of the past, Harley Davidson seem to have an on-going issue with T-shirt supplies. They had none in Large, and only one in XL!

What?! No souvenir T-shirts?! We have Harley Davidson T-shirts from nearly 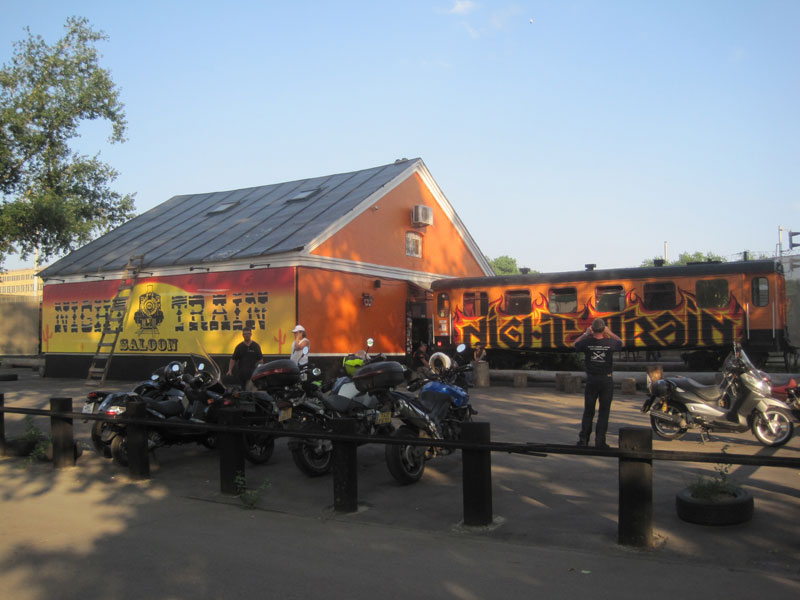 everywhere weve been. This was unthinkable!

All was not lost, however. The Harley Davidson Club of Russia operate from a clubhouse above Maxims own biker bar and he was pretty sure that he could sort us out some Club T-shirts. Last stop on the days sightseeing tour then was the Night Train bar

We arrived back at our hotel, hot and dusty and rather sunburned. But we had seen all the major sights and had had the best fun ducking and diving through the traffic. Like true Moscovites, we paid no heed to the speed limit, parked on pavements, U-turned wherever it suited us and zipped in between la

nes of stationary traffic with our hazard lights blinking, tooting our horns for other road users to let us through! With Maxim as our guide, we rode as we would never have dared on our own, and got a unique view of Moscow that few other visitors would ever experience. 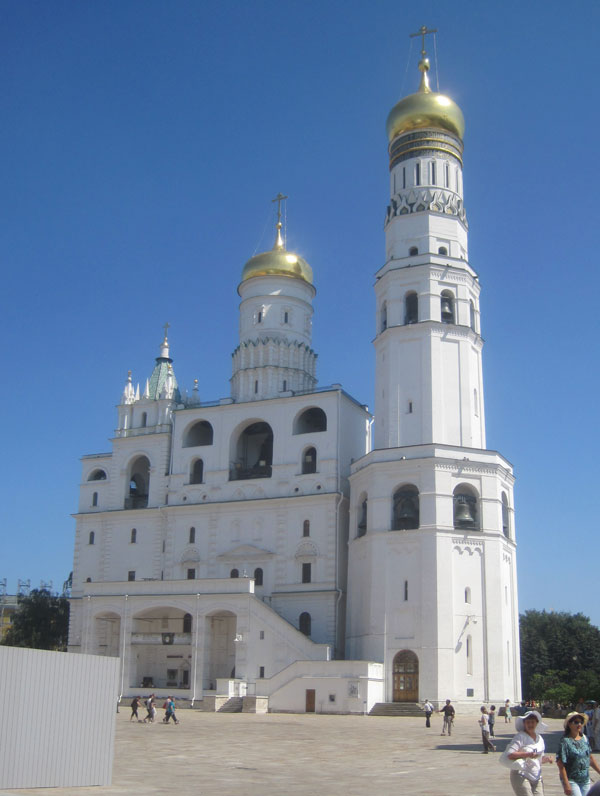 On Friday we arranged to meet Maxim in the evening. We left the bikes at the hotel and set out by Metro to explore the Kremlin Museum.

We were just heading back, when we received a text asking us if we would mind stopping by the Television Centre before dinner, as Maxim had been invited to

give a quick interview about his trikes for a cable channel. We couldnt understand a word, of course but, again, it must be a pretty rare thing for a group of British tourists to end up spending an evening watching an interview being taped in Moscows Television Centre. The interview took longer than planned, needless to say, but JP took a lot of photos in the studio and one particularly good shot of the Television Tower from the Gents loo window!

Hearing that we had missed the All-Russia Exhibition Centre in the afternoon, Maxim drove us there at dusk. This theme park houses some of Russias most iconic Soviet-era statues and pavilions represen

ting each of the former Soviet states as well as permanent displays representing various Soviet industries. Unfortunately, it had closed for the evening. The security guards were, perhaps unsurprisingly, unsympathetic and, although there were still a lot 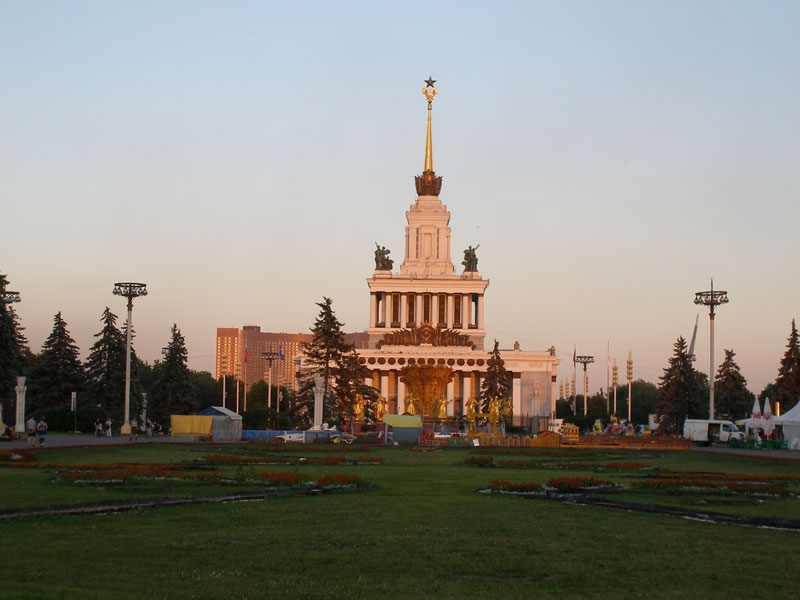 of people inside, refused to let us in for even a few minutes. Undeterred, we got back in the truck and drove round the perimeter until we came across an open gate where the guards didnt have machine guns.

Since the break-up of the Soviet Union, some of the pavilions have fallen into disrepair. But the park is still impressive and, evidently, popular with the young. There were fountains (turned off for maintenance), music, sideshows and cafes. None of which showed the least sign of closing for the evening, despite having gone closing time.

Our last experience for this stay, was a visit to Russias oldest and largest biker bar. Called simply, The Biker Centre, this extraordinary site is home to the Night Wolves Bike Club. It looks like a real-life set from Mad Max. All the buildings, fixtures and fittings are hand made from recycled scrap metal and the interior of the bar was hung with animal hides and weapons  and disco lights. Lots of disco lights! All bikers are welcome, as are car drivers (though they have their own section). Scooter riders, however, if they even get past the gate, are swiftly shown the exit.

And that was the grande finale of our Moscow visit. The following morning, Maxim picked us up from the hotel at 9am and escorted us out of the City, putting us on the right road to Orel. We said our goodbyes and started our return run to Moscow, Ayrshire.

Thanks for everything, Maxim. As Plumb would say, youre a Dude!