So we were on our own again. Maxim had been highly sceptical of our choice of route into the Ukraine. We were due in Kiev on Sunday, and had booked a Chernobyl tour for Monday 4th.When planning the route, John had simply looked for a reasonable-sized town or city approximately midway, and had landed on Orel. Although we had heard reports (favourable and otherwise) about the Ukraine, we had not met anyone who had actually driven there from Russia.

Actually, despite the general state of disrepair, Russian roads would be fine  if it werent for Russian drivers. When the dual carriageway section ran out and a queue formed due to road works, drivers in both directions simply used the dusty central reservation as an extra lane, effectively creating a sandstorm! The almost total lack of visibility was no deterrent.

In Orel, there were clear signs that some attempt was being made at an interior revamp of the Hotel Salute.

The loud flowery wallpaper that graced JPs room was gradually being replaced elsewhere with pastel shades. And, although the taps needed a bit of encouragement and there was no plug in the bath, the bathroom fittings appeared new. Certainly the hotel provided the fluffiest and most-luxurious towels that we had seen anywhere on this trip! Other than that, Orel seemed to have been left behind by post-Communist Russia. Definitely no McDonalds wifi access here!

The following morning, we had nearly 200km to ride to the Ukraine border. It was slow progress. Now we began to understand Maxims scepticism. We had skipped breakfast in the hopes of finding a roadside café somewhere along the route, but there were none. None open, anyway. And, once off the M2, the road, despite its optimistic A-road label, deteriorated to little more than a farm track. 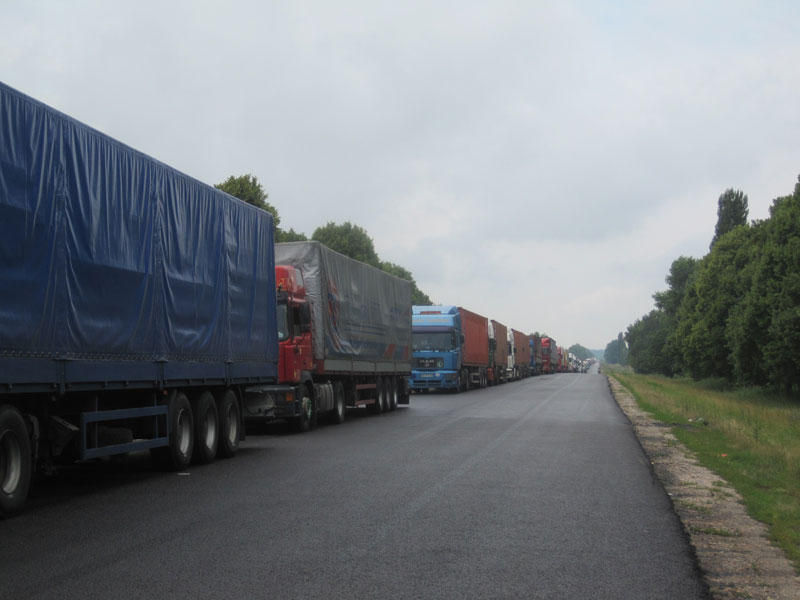 Arriving at the Ukrainian border, we had hoped that we would be able to jump the queue, as we had at the Estonian border. Leading the group, I boldly pressed on to the front, where a border guard was checking the papers of the first car. He spoke no English, but signalled to me to turn around and go back to the end of the line. I put on my best blond impression, and pretending not to understand  then clumsily manoeuvring my bike into an impossible position, embarrassing the two Johns, and effectively blocking off the oncoming traffic. Exasperated, the guard actually seemed quite relieved when I eventually managed to squeeze the bike into the queue about five cars back, restoring order to the line of traffic  and saving us an hour or twos wait!

The Russian half of the border crossing was dealt with fairly swiftly. No one was in the least interested in our hotel registration forms and we werent arrested for our many Moscow traffic violations. Our passports were stamped and we were free to move on to the Ukrainian side  where any progress came to a complete halt.

We waited for an age while various officials came and went, each one inspecting our papers and asking us to open random items of luggage. No traffic moved through the border post at all. Then, alarmingly, a uniformed guard appeared and collected up all the documents from the twenty or so waiting vehicles and carried the whole multi-national bundle into the office. We neednt have worried. Gradually, the cars ahead of us were processed and we moved under the shelter of the building – happily enough, just as it started raining. Even more fortuitously, the rain stopped just as we ready to leave.

As with our Russian border crossing, we needed to sort out insurance for JPs bike before moving on.

There must be a good reason that UK insurance companies refuse to insure vehicles for travel to Russia and the Ukraine and, whatever it might be, it made us uneasy. Was it the widespread police corruption that we had heard so much about, or the state of the roads  or was it a perceived image of some sort of post-Chernobyl nuclear wasteland that worried the underwriters? In any event, it didnt take long to dispel any negative images.

For the majority of the journey to Kiev, the newly improved M02 was as good as any major Western highway. At most junctions, though, we would notice that the tarmac quickly gave way to dirt track, stretching away into the lush green countryside. Roadside

catering was an improvement on Russian standards too. Having missed breakfast, we were ravenous by the time we crossed the border, but we soon came across an attractive log-built café, complete with English menu, serving the first proper food we had eaten since leaving Moscow.

The sun had turned to light rain by the time we reached the outskirts of Kiev but, even so, the day would have been almost perfect  if JPs bike hadnt suffered a broken clutch cable on the way to our city centre hostel!