At 8.45am on Monday, we were ready and waiting for the bus to take us to Chernobyl. It was already warm. As advised, we wore long sleeved shirts, long trousers and our sturdiest shoes, and we were carrying plenty of drinking water for what promised to be a hot day. 9am came and went with no sign of our guide. We had paid a $50 deposit over the internet and, by 9.30am, were beginning to wonder whether we had fallen victim to a scam. Alas, a phone call to the tour organiser revealed that the Ukrainian government had cancelled all Chernobyl tours, with effect from the previous week. We had, in fact, had an apologetic email with the offer of a refund, but  due to lack of internet access in Orel  had not downloaded it. 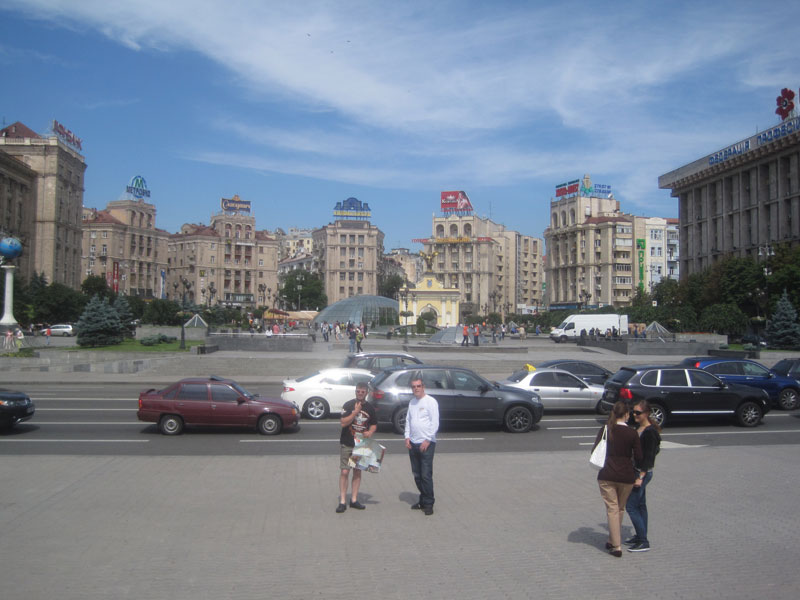 So, here we were on a lovely sunny day in Kiev, with a day to spare and nothing planned. The tourist brochures at the hostel were not inspiring, so we went in search of the tourist office, clearly marked on our freebie map as being located in the Metro station. There was a Chernobyl museum that might have been interesting, and we were intrigued by Lenins Secret Tunnels and there were regular 2-hour walking tours of the Citys main attractions. However, first, we had to locate the Tourist Office  which was not in the Metro station, and none of the Metro staff were in the least interested as to where it might have moved to. Never mind. We had a map, so we set off on foot to look for the Chernobyl museum, having a bite of lunch on the way.

The Museum was closed to the public. The notice on the door indicated that it should be open, but the surly attendant didnt speak English and was unwilling to waste his time attempting a Dumb Crambo explanation.

By this time, we were all getting a little fed up. Kiev is an attractive city. In spite of an odd blend of Communist and Capitalist, the city has an almost Parisian feel to it. Elegant mansions rub shoulders with modern utilitarian blocks. There is music and street theatre, Western designer labels and statues of Lenin and medieval warriors. But now that it had lost its principal tourist attraction, Kiev didnt seem very interested in tourists. We cut our losses and headed back to the hostel to retrieve our laundry.

The following morning we left early, taking the highway to LViv: the trans-European E40 artery that would, eventually, carry us all the way back to Calais.

greater. The city has an abundance of old-time charm. Its narrow cobbled streets are lined with bars and restaurants and its historic buildings seem to have survived both War and Communist occupation unscathed. Not for the first time, we wished we could have stayed a little longer

Our reluctance to leave LViv was intensified by the sound of heavy rain hitting the roof of our loft-style hotel bedroom in the early hours of Wednesday morning. We could only hope that the weather would pass over by the time we needed to leave.

d to make matters worse, our three bikes were parked in the hotel car park  some distance from JPs hostel, on one of the few occasions, so far, that we had opted for separate accommodation. By the time he had trudged round to the Swiss Hotel, he was soaked  and by the time we had loaded up our own bikes, we were also soaked. The rain came down in sheets, seeping into the smallest opening in our waterproof layers. We were miserable and in poor humour.

The cobbles and raised tramrails were treacherous on two wheels, and I was in no mood to repeat the previous evenings Garmin experience, whereby we had entered LViv by a convoluted backstreets approach: apparently an exclusively male amusement, culminating in the dodging of restaurant tables as we followed the GPS directions across a pavement! But what would I know? This morning, at least, with JP rendered almost blind by his steamed goggle and glasses combo, I was allowed to use the signposted main road out of town.

Visibility in the rain was extremely poor and the road surface made passing slower traffic nigh on impossible. At the border, we tried the usual trick of pushing into the line of traffic a few cars from the front. Confronted by an angry driver, it seemed the border guard was going to adhere to the rules, meaning we would simply have had to turn around and join the end of the queue. But, after a few minutes pleading, he took pity on our soggy state, and let us through.

The Ukrainian exit procedure was roughly similar to the entry. An official collected up the documents for all the waiting vehicles and disappeared into a cabin, calling each of the drivers in turn. It didnt take long and, as the steady rain became a squall, we moved under the shelter of the customs shed on the Polish side.

We rejoined the E40. Only, rather than a European-style motorway, we were dismayed to find a narrow dual carriageway, clogged with slow-moving trucks. The rain was unrelenting. JPs inadequate clothing was wet through. JR was dry from the waist down due to his new trousers, but the waterproofing of his 5-year old Joe Rocket jacket had given up and his upper body was soaked. I had decidedly damp knickers and my (too short) Hein Gericke all-terrain trousers had ridden up, allowing water to run into my boots. We were all cold and, by the time we arrived in Krakow, it was generally agreed that we needed to rethink our schedule to allow time to dry out our kit.

JP was the first to discover the launderette at the end of our street and, consequently, was the only one in any fit state to have continued on the road the following day. However, as he had rightly pointed out, Krakow turned out to be one of the loveliest cities on our route and, as he was staying with a friend, he was easily persuaded to take a days rest. Just as well, as JR had picked up a stomach bug, and was in no state to go anywhere. There was a pizzeria underneath the excellent Free Hostel, so we shared a Four Seasons and got an early night.