The day got off to an inauspicious start. JP arrived at the hotel complex as planned, but the receptionist at the Ibis hotel simply told him that there was no-one of our name booked in. She didnt think to direct him across the car park to the Etap hotel  We caught up with JP at the Eurotunnel terminal but, like JR, he doesnt function well on an empty stomach.

From my point of view, the best that can be said about the Eurotunnel transit was that it was quick and efficient  and it didnt leak! I dont usually suffer from claustrophobia, but I have been avoiding the Channel Tunnel since it opened in 1994. I view the Tunnel in the same light as air travel. Given the choice, I would rather travel by sea. Even so, Eurotunnel had generously donated tickets in order that we would be in time for our rendezvous with our Royal Patron, HRH Prince Michael of Kent, at the Clackett Lane Services on the M25. Never let it be said that we lack style!

As we pulled in, on the dot of 9am, Jim could barely contain his excitement (and his relief) that we had made it. With him was our very own Mr Fix-it, Robin Jeffreys, our supposedly redundant support driver who had, none the less, remained on call, seemingly 24/7, for last minute hotel bookings and other logistical problems throughout the ride. 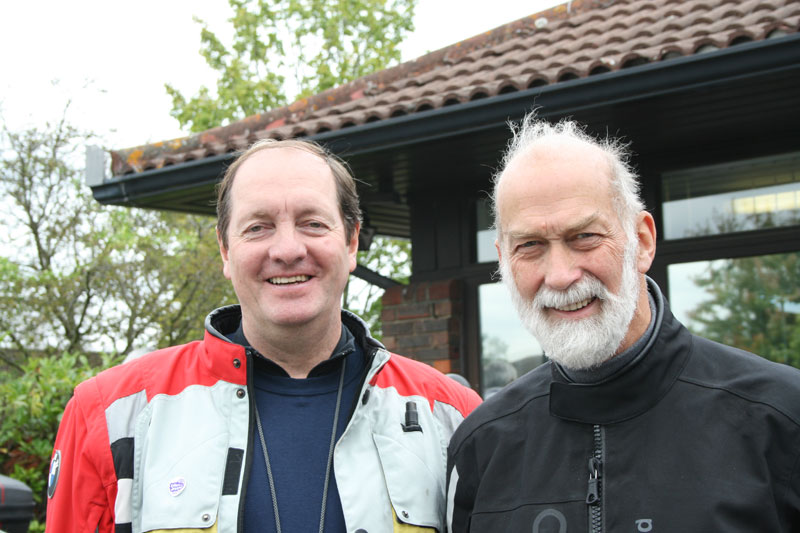 Prince Michael is a keen biker himself and general motorsports enthusiast. In 2005, he took part in a trans-Siberian charity ride, and it was through one of the organisers of the White Knights ride (from Vladivostok to St. Petersburg), that he had become involved with ours. He had arranged quite a welcoming committee for us. His distinguished group of Knight Riders, consisted of Lord Fairfax of Cameron, Olympic Bobsled Champion, Victor Emery, and Lady Rose Cecil (of the White Knights); as well as the motorcycle-mad Earl of Clanwilliam and avid explorer, Carletto ODonnell. One can only imagine what the baristas at Costa Coffee made of the cheerful mayhem, as the Princes Protection Officer tried to round us up and make sense of the coffee order, with only partial success  Two expressos, three medium lattes, and one large with skimmed milk. Two, sorry, three medium cappuccinos  Make that five lattes, four medium and one large  One medium black americano, two medium americanos with cold milk, one with hot milk. Thats three americanos altogether  and well have eight almond croissants and three cinnamon pastries  Oh, you only have five croissants. Make that five croissants and six cinnamon pastries. Sorry, seven cinnamon pastries and four croissants  Have I forgotten anyone? Did someone want tea? We had all arrived very punctually, so there was plenty of time for coffee and conversation.

The route to Stoke Mandeville had been the subject of much debate. Although motorway riding is nobodys idea of fun, it was mid-week and the roads were still busy from the morning rush hour. Theoretically, using the M25 and M40, it should have been easier to keep the riders together. Even so, from Robins vantage point, bringing up the rear in our car, rather than a disciplined convoy, we arrived on the motorway like a bomb-burst, with bikes filling every lane. It didnt seem to worry our Special Escort Group officer, Mick, who took off ahead on his BMW S1000RR to check for potential obstructions. The faster riders followed, while John, JP and I rode together at our customary 60mph. In our mirrors we could see Jim, a couple of other bikes and the two cars. We regrouped as we came off the motorway and arrived at the National Spinal Injuries Centre in an altogether more orderly fashion. 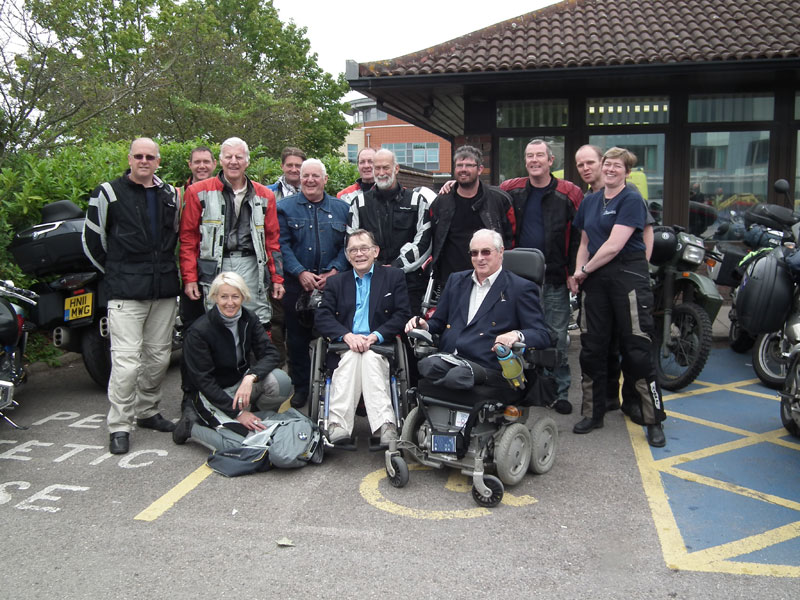 We were greeted by Poppa Guttmann Trust Chairman, Mike Mackenzie, and Trustees, Philip Lewis and Dr Alison Graham. The riders and Trustees were interviewed and photographed and Prince Michael chatted to staff and patients before touring the facility. As always, JP’s MT350 generated much curiosity and admiration for his achievement. More group photos were taken and then The Buckinghamshire Healthcare NHS Trust, of which Stoke Mandeville Hospital is part, laid on a buffet lunch. There were speeches from Mike and from Anne Eden, the NHS Trust Chief Executive, but the mood was relaxed and informal. We had made it. Jims mad idea was a success. Initial estimates put the money we raised at around £14,000 and, with the cheque presented to Mike by the Health Authority, the future of the Poppa Guttmann Recognition and Celebration Project is now assured.

Of course, for us, the ride wasnt quite over. We still had to complete the round trip to Moscow, Ayrshire.