All of a sudden, we found ourselves starting our last full day in Continental Europe. Malmedy to Calais is, by recent standards, a relatively short day. JP suggested lunch at the Atomium in Brussels, which he had last visited as a child. Why not? Ironically, on one of the few occasions that we could have afforded to meander slowly through the countryside and still reach our destination in daylight, Garmin offered no minor roads alternative to the motorway. It made sense to make the most of the day. 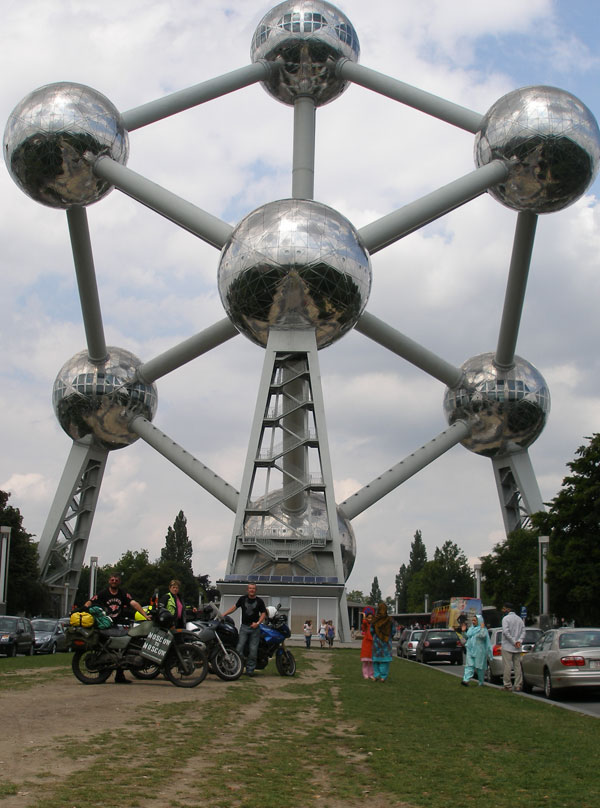 The Atomium is a 102-metre high structure consisting of nine stainless steel spheres representing an iron crystal magnified 165 billion times. Inside are a network of viewing platforms, exhibition spaces and restaurants. Considering it was built in 1958, I did find myself wondering how they manage to keep it so shiny and new-looking. Mr Sheen, perhaps? Unfortunately, when we arrived there was an enormous queue for tickets to tour the structure itself. No sooner had we made the decision to save ourselves the entrance fee and concentrate on lunch, than the queue evaporated. JP bought some postcards and then we manoeuvred the bikes onto the grass and took our photos. 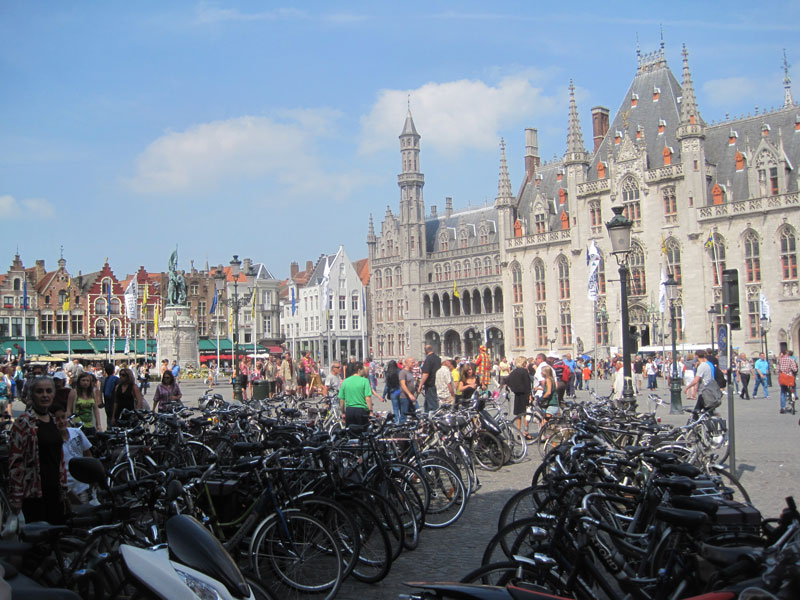 The next stop was Bruges, where JP had hoped to see the Cathredral of Sint Salvator. In common with too many of the must see items on our itinerary, it was closed  for renovation. Disappointing for John, but it hardly seemed to matter. Bruges has a lot more to offer in terms of architectural interest. Actually, I confess it was such a hot afternoon, that I was more interested in an ice cream  Oh, and chocolate. I couldnt leave without eating some chocolate. JP picked up a Mr Whippy cornet from a kiosk and went to download his email and check up on any late changes to tomorrows schedule in the Quick burger restaurant. Meanwhile, I persuaded JR to buy me a disgustingly decadent chocolate ice cream sundae at the adjacent Häagen Dazs restaurant. Häagen Dazs being, err hum, that well-known authentic Dutch brand  invented by a Polish immigrant in the Bronx. Who cares? Its good ice cream wherever it comes from

And that was that, really. We topped up with fuel and got back on the motorway. Unusually, JR and I had our accommodation booked, while JP wanted to spend one last night under canvas. We identified our Etap hotel on JPs GPS, made arrangements to meet up for breakfast the following morning, and went our separate ways.