Crossing the border into Germany on Saturday morning was a simple matter of driving across the bridge into Gorlitz. We rode on for 50km or so before stopping for breakfast in Bautzen. What attracted us was a roadside advertisement for what, in theatrical terms, might be called the Scottish Restaurant. In fact, our reliance on their free wi-fi had become something of an irony. For all our wanting to experience local culture, over the last few weeks, throughout Europe, we had become increasingly dependent on McDos. And, of course, every visit required a purchase of some sort, so three intelligent and mature people who would not normally set foot in the place, had gradually become addicted to soggy burgers, fries and milkshakes. 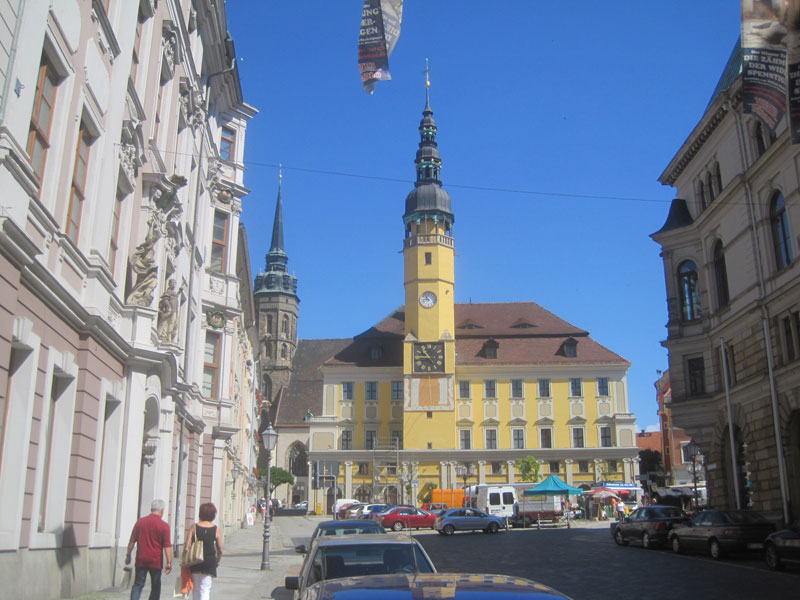 As it turned out, Bautzen was a pretty market town and the advertised branch was on the autobahn. So rather than commit ourselves to the tedium of the E40, we installed ourselves at a sunny table in a 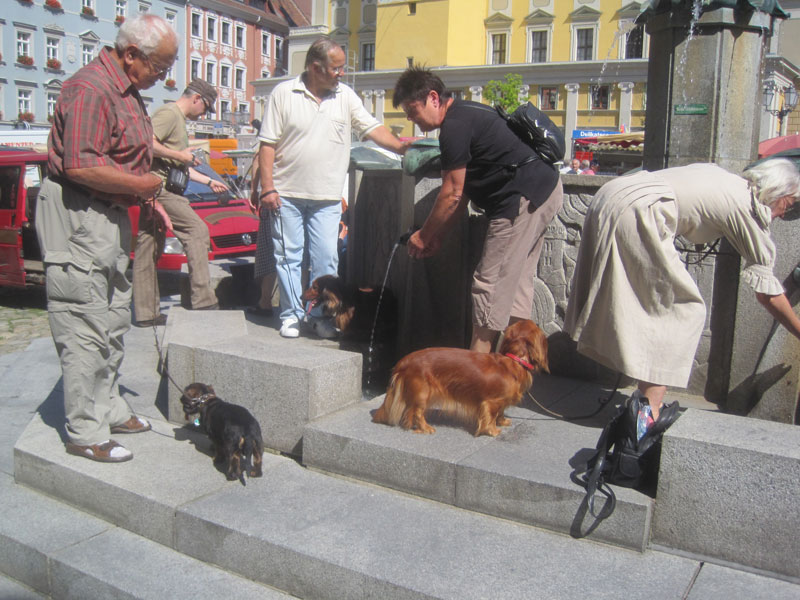 popular-looking café. The serenity of the moment, however, was soon disrupted by the arrival of a Dachshund Owners Club and two dozen or so barking sausage dogs. They moved on quickly enough, but were almost immediately replaced by the arrival of a party of noisy Serbian students. JR groaned. In his fragile state, it was all too much to bear, before even one cup of coffee! Being the only German-speaker amongst us, JP ordered a continental-style breakfast

Having eaten, we paid up and rode on westwards. We stopped for a brief Kodak moment in Dresden before JPs Garmin got its knickers in a twist and we found ourselves making an illegal right-hand turn against the lights. After the slightly tense conversation that followed, it was decided that we should follow the same plan as the previous day, with JP taking the scenic route using the minor roads, while we plough on and identify a suitable campsite for the night.

JP caught us up in 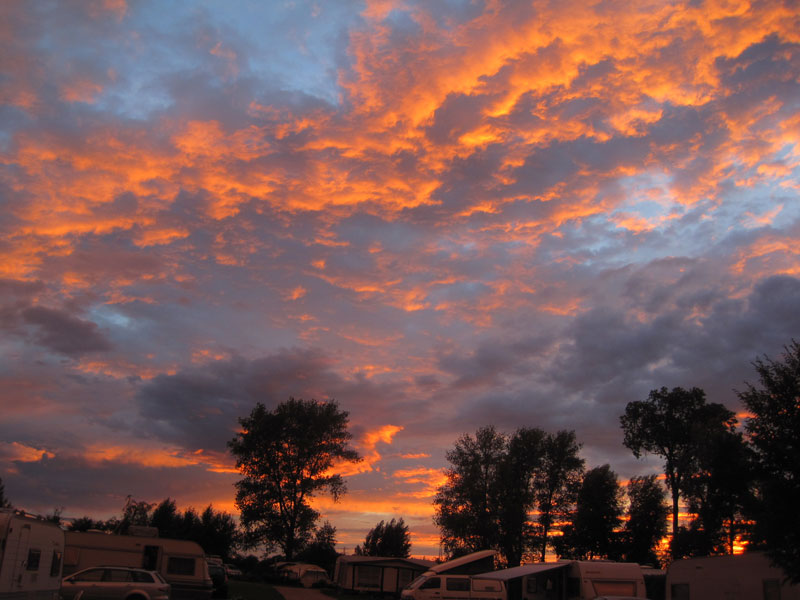 where, much to our own surprise, we had successfully managed to negotiate a double tent site, using what can only be described as Englicht and sign-language. Despite a light shower or two, we were treated to a beautiful sunset, further enhanced by a couple of beers supplied by the resident couple from the next door plot.

Inevitably, one person can break camp much more quickly than two. Rather than watch us faff about with tents and coffee on Sunday morning, we agreed that JP should get on the road and we would catch him up. It sounded sensible enough but, despite leaving less than half an hour later and hammering down the autobahn at 90mph, we would not have caught up at all, had JP not stopped for coffee. While we discovered that, in Germany, McDos free wi-fi is restricted to those who possess a German mobile phone (Germans, in other words), JP had discovered that Burger King was more welcoming to foreigners. He monitored our progress using Plant-Is tracking website and, as we approached, positioned himself at a very obvious vantage point at a major junction.

We were heading for Malmedy in Belgium and, determined not to have to use the autobahn, JP had programmed his GPS to avoid motorways. Coming out of Koblenz, this seemed to me eminently sensible, as the main road between Mayen and Blankenheim was designated scenic and appeared, on the map, to be twisty into the bargain JR commented that I would be in my element, and, since it was raining lightly, making life difficult for JP on his knobbly tyres, it was agreed that I would take off ahead of the guys to enjoy the ride. We stopped for fuel and I checked the road number and general direction against JPs Garmin just as a group of British bikers pulled in, coming from the opposite direction. After exchanging greetings, I led the two Johns as far as Mayen, checked we were on the correct road for Blankenheim and accelerated away

The road was full of bikers and it didnt take a genius to work out why. Rather than Blankenheim, the road signs listed Nurburg as the next major town. Great, I thought to myself, Well get a photo op of us all at the Nurburgring  what a bonus! I rode on, blissfully unaware of the impending storm.

At Nurburg, I stopped. It was still raining and I supposed that the two Johns were not far behind. I waited by the side of the road. Minutes passed. Then my phone rang

By the time the two boys caught me up, JR was spitting bullets. Why had I ridden on ahead without checking that they knew the way? Why hadnt I waited at the junction? Why hadnt I ?

Hang on. Hadnt I just done what I said I was going to do? I had checked the road number with JP, hadnt I? He did know the way. It was simply a case of following the road signs. Why would I have turned off the main road? Anyway, here we are at the Nurburgring. The track is visible from the road back there. Isnt that kind of cool? I looked to JP for support. You knew which road I was taking. I showed you the map. You agreed.

You cant expect me to memorise road numbers and place names, said John, Besides, I wasnt listening. I was more interested in talking to the other bikers. I looked to JR and shrugged. Well, said JP, defensively, Im a bloke. Its what we do. There isnt much one can say to an answer like that.

We took our photos in front of the Nurburgring HQ and rode on. I took my rightful place at the back of the group and we allowed JPs GPS to lead us the rest of the way to Malmedy: through tiny hamlets, wind farms and road closures – via the shortest distance, preferring minor roads